This site doesn't support Internet Explorer. Please use a modern browser like Chrome, Firefox or Edge.

Get ready to play the LEGO® Brick based Tabletop Role Playing Game!

Epic Brick Adventures isn't like any other roleplaying game you've ever known. In most RPGs, the idea is to plot and plan — to think before you act — and to make sure your character survives, thrives, and becomes more proficient at everything he or she does.

When getting stomped on by giant robots or jumping out of airplanes without a parachute no longer means that you need to make a new character, you will soon learn to start taking risks... really BIG risks, that you never would take in real life or even other RPGs! You can't ever really die, (you are made of plastic) so you've got nothing to lose by jumping right into the thick of things, having fun and taking chances.

Here's something else that's special about playing the role of a MiniHero: It doesn't matter how weak or inept your character is. Poor dice-rolling or terrible stats don’t mean a bad character. Half the fun of playing is failing . . . because of the crazy things that can happen when you fail! "Bad" characters are just as much fun — maybe more fun — than "great" characters.

So forget what you know because, “YOU ARE A TOY!”, just to quote a famous toy.

Come Play With Us!

We would like you to be able to join in the fun!

That’s why we are giving you the Epic Brick Adventures Introductory Rules Guidebook for FREE.

It’s not just a preview, it is a fully playable version of the game. We want you to be able to play the game and start creating your own adventures right now.

So what is Epic Brick Adventures and...

How do I Play? 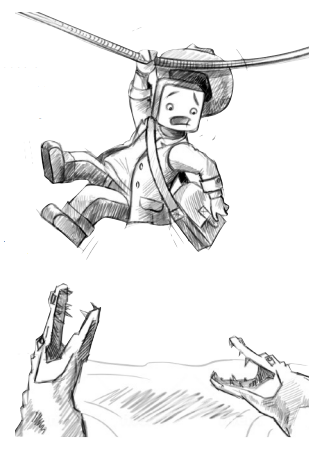 Choose a Role to Play

As in most Role Playing Games (RPGs) the GameMaster, or in our case, the BrickMaster, is the one guiding the story, while the players are the main characters in that story.

For example: If the story of The Hobbit, were an Epic Brick Adventure, the players would be Bilbo, Thorin or any of the other Dwarves, maybe even Gandalf, and the BrickMaster would be the narrator, the three trolls, all the goblins, Gollum, the eagles...

You get the idea, the BrickMaster is every character that the players aren't.

Each player plays a character in the story, we call these characters MiniHeroes.

As a player, you only need to know the rules that pertain to your MiniHero and the basics of how Challenges work.

The BrickMaster creates the world, the Players create the story. You and your fellow MiniHeroes will be faced with many Challenges to overcome! Leaping over bottomless pits, outwitting nasty monsters, building awesome vehicles and exploring hidden worlds - the results of which are determined by the Bag of Bricks! Players reach into the Bag of Bricks and blindly draw a number of Action Bricks from the bag to determine the results of the Challenge they are overcoming.

Yes, instead of dice, we use bricks. There are three types of bricks that determine your Challenge outcome: Success Bricks, Blunder Bricks and Epic Bricks.

Your team of MiniHeroes celebrate awesome Epic Successes and even spectacular Epic Blunders as the bricks come crashing down! Even in the worst of Blunderous outcomes all can be rebuilt, maybe into something even more awesome!

Never has a Role Playing Game been so tactile, so engaging, with such unpredictable possibilities. If you want to feel the action… pull up a chair, grab some bricks and let your imagination grow!

Why are we creating these awesome brick worlds and...

Epic Brick Adventures was created by Richard Hoedl, who developed the game from the simple desire to play a Role Playing Game with his kids.

A game that was creative, fun and wouldn’t give kids nightmares or stress them out because their favourite character died. Creating a Role Playing Game in the universe of plastic building bricks, a universe that kids are already intimately familiar with, seemed like the perfect solution to create a game that they would love from the second the bricks hit the table!

A game they could grow with, a game truly as big as their imagination!

Please come and hangout with us on Discord.

This is the invite link

This looks amazing!  I always wanted to try DnD growing up but never got the chance.  Now I have an  year old and this game sounds perfect!  Thanks for sharing.

Play in a whole new way!

Disclaimer: Neither Brick Masters Academy nor Epic Brick Adventures nor any of the sites or resources linked to in this website are affiliated with or sponsored, authorized, or approved by any producer of plastic building bricks, and specifically not by the LEGO Group. LEGO is a trademark of the LEGO Group, which does not sponsor, authorize or endorse this Role Playing Game.